I cannot think of a place more idyllic than Ojai for a summer festival: it combines the climate, setting, and curiosity that make for a deeply inspiring and enriching event. Although this year’s Ojai Music Festival only lasted for four days its sensorial memories--acoustic, visual, kinesthetic, tactile, and olfactory--will last for years.

The land around Ojai is sprinkled with flowers and trees that infuse the air with delectable scents, and the weather is warm without being sweltering. In the evening, when concerts takes place in a partially outdoor venue called the Libbey Bowl, temperatures drop to chillier, but still comfortable degrees. The Libbey Bowl reminds me of a smaller version of Wolf Trap: most of the audience sits within the raked auditorium, but a lawn area is available--and ideal--for those with young children or those who prefer to picnic. The seating capacity of the interior and lawn areas of the Bowl is about 1,300 (Wolf Trap’s capacity is 7,028 total: 3,868 in-house; 3,160 lawn).

Some of the audience members who come to the Ojai Music Festival, an event that has happened each summer since 1947, have been attending since the 1940s. Some are local residents, others come from nearby cities like Santa Barbara and Los Angeles. Still others are residents of the east coast and the Midwest who come for the change of scenery and distinct artistic programming (several events triggered the question: is there a “California” or “west coast” aesthetic?) Whether local, regional, national or international, these patrons ranged from lawyers to retirees, critics to producers, and philanthropists to professors. I immensely enjoyed a couple brief conversations with Dr. Susan Foster, author of 2010’s “Choreographing Empathy,” who is a professor a UCLA and a patron and supporter of the festival.

This summer marked a significant first: the choreographer Mark Morris was named the festival’s music director. His appointment meant that his company, Mark Morris Dance Group (MMDG), performed on stage during one of the evening concerts, and he also added a solo called “Ten Suggestions” (originally performed by Morris and here performed by Dallas McMurray) to the last day of events. From listening to conversations with audience members it seemed that people appreciated adding dancers to a festival that traditionally consists of composers and musicians.
Morris himself conducted on the last day, and during an arrangement of Carl Ruggles’ “Exaltation” by Colin Fowler, he turned around to invite the audience to join the singing (pictured here). 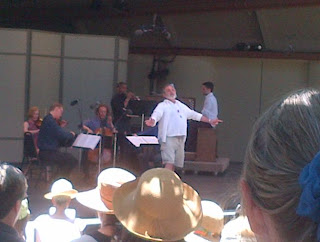 While Morris’s multifaceted roles within this year’s festival were interesting, the aspect of the last four days that most inspires me is the festival’s programming. Even though dance history and criticism are the current focus of my teaching and research, I’ve worked with three distinct festivals. The first was Jacob’s Pillow Dance Festival where I was an intern the summer after I graduated from Princeton in 1993. The second was Lincoln Center Out of Doors where I edited program copy and worked closely with producer Jenneth Webster for close to a decade, learning a wealth of information from her about what it means to design events that are creative, innovative, fun, and completely free to the public. The third was SommerSzene, a festival of contemporary performance in Salzburg that I have attended for years, most recently serving as its 2008 dramaturg.

Attending the Ojai Music Festival I realized not only that I know far more about dance and dance history than I do about music, but also that music directors and audiences approach their material in ways that are creative and thought-provoking, perhaps giving dance programmers some things to consider.

Within a four-day span—from June 6 to 9--events at Ojai included talks with artists, site-specific events, documentary films, performances, plus participatory gatherings like an evening of social dancing and movement classes with MMDG artists. The events seemed to embrace multiple purposes:  setting the scene historically and contextually, generating memorable experiences, and deepening audiences’ awareness of--and joy—as they engaged with lesser-known works. Grounding and gluing together the diverse array of events was a thick printed program of artists’ biographies and essays about the concerts. This printed material supplemented the talks that gave brilliant insights into artists’ lives and their placement within broader cultural and political contexts. These talks were beautifully moderated by Ara Guzelimian, Provost and Dean of The Juilliard School. One of many memorable moments happened when Mark Morris’s recalled visiting Lou Harrison’s house, and particularly his bathroom that contained a nude painting of Tchaikovsky. Morris says Harrison called it “the Tchaikovsky room.”

The movement class I went to at 9am one morning was a bouncy affair taught by two MMDG dancers who introduced themselves as having multifaceted identities: Chelsea Lynn Acree also worked as a personal trainer while Nicholas Wagner was an apprentice with the company as well as a spin instructor. Their cues and exercises were typical fare found in many aerobics and stretching classes, but the respect and attention they commanded from the participants was extraordinary. It seemed that the people who gathered—perhaps 50 participants—had seen MMDG perform the night before and were mesmerized by the company’s grace and strength. If at first I was ambivalent about all the thorny issues regarding dance-as-fitness and dancers-as-overworked-and-underappreciated, I have to admit that by the end of an hour we were all smiling and sweating. I also liked how the morning class gave the festival a casual and interactive moment with artists and audience members.

Since I know far less about music than I do about dance, every event introduced a new sound or compositional approach. I loved hearing a score by Lou Harrison after listening to Eva Soltes describe how she made her documentary “Lou Harrison: A World of Music.” Throughout the festival, the programming was designed to show “family trees” of composers and influences: John Luther Adams told a funny story about wining a compositional competition and then meeting the judge (Lou Harrison). During the evening concert on Saturday, Adams’s “for Lou Harrison” followed Harrison’s “Suite for Symphonic Strings.”

It was enriching to read in the festival’s 124-page program (free to all attendees) about the history of these compositions. At each event I thought about how dance artists could benefit from this kind of setting: meaning both the actual setting of Ojai and the theoretical material that supported these artists’ works. People I spoke with in Ojai were not craving music that was accessible and easily-consumed, but were willing and curious explorers, delighting in a newfound sound or deeper connection (seen, heard, felt, read about) between artistic approaches.

This is where I noticed the biggest gap between what I experienced in Ojai and dance programming in DC, especially festivals that try to include “a little-bit-of-everything.” For artists I imagine it is frustrating to create or condense works into 10-minute snippets, and as an audience member these shows feel to me either like a whirlwind of drastically different genres or a popularity contest: who is the most fun? Cute? Exciting?

Attending festivals and events in DC I wonder if this attempt to include as many artists as possible or to cater to every possible audience taste comes from a fear of offending someone or excluding a certain genre. What the Ojai Music Festival does so brilliantly is to have different music directors (this year it was Mark Morris, but in previous years it has been Igor Stravinsky, Aaron Copland, Sir Simon Rattle, eighth blackbird). The music director works with the artistic director (Thomas Morris) to create the festival’s programming.
Ojai’s festivals delve adventurously into different genres of music and composition: they do not abandon depth for inclusivity. This year there was a focus on American music and musicians, but next year it will undoubtedly be different. The idea is not to include as much as possible for fear of upsetting someone who is excluded, but rather to thoughtfully present all the selected artists on their own terms.

This is what Ojai Music Festival does so brilliantly: it honors and respects the shared intelligence of both artists and audiences. It knows that music is powerful and conveys messages that are viscerally felt, non-verbal, and politically relevant. And it knows that artists deserve to have their works placed in contexts that speak to one another and that enrich our own awareness of the interconnectedness of these aesthetic ideas.

The one venue in the DMV that I see making this effort to engage artists and create contexts for their work is American Dance Institute. ADI hones a curatorial approach that selects current, rigorous, thought-provoking artists while simultaneously developing programs that effectively nurture and catalyze creative development. Its recent Festival of New Works offered a platform for artists selected for ADI’s Incubator Program. I love doing the ADI pre-show talks that discuss aspects of an artist’s career and how they fit into—and disrupt—notions of what it means to dance, to choreograph, to perform. I am particularly excited to be speaking this weekend about a program of pieces by Runqiao Du/Ballet ADI, Christopher K. Morgan, and Dance Exchange.

Last weekend was my first time attending the Ojai Music Festival and it made clear that audiences enjoy discovering a rarefied composer or esoteric composition. Undoubtedly it helped that these events were placed in the bucolic setting of Ojai and its summer breezes. But what really amazed me was the depth of the supporting materials and events, the brilliant context offered by the festival’s programming and printed program. Artists like Henry Cowell, John Cage, and Terry Riley are not beyond our grasp. Just the opposite in fact: their compositions connect us to sensations of creativity and beauty, and offer answers to questions like what happens when we acknowledge a wider range of artistic influences? Their works are generative because they can open our eyes to the interconnectedness of a wide spectrum of artistic—and social--relations.