any experience worth having... 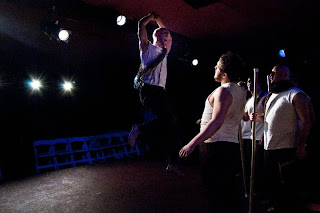 The more I teach the more I find that there are three key things I hope students will grasp in a course like Dance History or Appreciation: first, the confluence of events that creates great artists and masterpieces; second, the diversity of people who have shaped our definition of dance in 2010; third, the arts, and dance in particular, are essential forms of communication and wellsprings of meaning. I know that a course has planted - or nurtured - that seed of curiosity in a student when I receive an email after they attend a performance that touches upon material we watched and discussed.

Yesterday I opened a message from Jeremiah, a student in the summer Appreciation course I taught at GMU. He attended a version of Macbeth that used elements of capoeira in some of the battles, and I had seen this production when it was part of the Capital Fringe festival in DC and wrote about it for DC Theatre Scene. I mentioned it one evening to the class because I found the show fresh and captivating. Its run was extended after the festival, and the performance that Jeremiah saw took place in McLean at 1st Stage. It makes me smile when I open a message from a student who has taken a course and wants to share his/her perspective on what artists are making today. I asked Jeremiah if I could include his email here on the blog and he wrote: "any experience worth having is worth sharing..." So here are his insights:

"...it was nothing short of fantastic. I did have a little shred of an unrealistic anticipation of how much capoeira would actually be incorporated, but I didn't let it detract from the performance in any way. I haven't been to a play since I saw Romeo and Juliet nine years ago, but I definitely recognized the taste of classical Shakespearean genius while being privileged with an intelligent and refreshing contemporary vision of it. I'm pretty familiar with the play itself and it's one of my favorites, so seeing it performed so well in a new way was extremely rewarding....

I think I liked just about everything about it, the cast and direction were fantastic. The transitions between scenes were all flawless, and though the stage seemed small when I came in they made use of every inch of it without looking like they were trying to. The minimalism of the costumes and stage I felt were just enough to do make characters recognizable by their dress but not being distracting trying to puzzle out messages from them. I particularly enjoyed the actor of the slain King Duncan trading in his baldric/robe for a shoulder cloak. Even if my conscience caught on his previous role, now he stood out completely from all the Scottish Thanes with a minor costume change (in a play with minor costumes!) The performance being held in a small theater with around 50 people, a few of the actors, especially Macbeth made eye contact with me a few different times during soliloquies, and it pulled me into the tragedy so much more than a big theater. Lady Macbeth freaking out at stage front from her nightmarish visions was also an interesting moment of eye contact, haha. The simplicity of the costumes drew me in as well, all of my attention was on the action, words and facial expressions in nearly every scene... The use of capoeira elements was at times almost to the point of hyperbole, which I actually really enjoyed, especially Macduff's leaping stab to kill Macbeth. The cast really made the play, even without the contemporary use of costumes and capoeira I know I would have enjoyed this performance. The witches were outstandingly creepy and sinister, and the scene with Macbeth's encounter with the spirit of Banquo was absolutely superb; eerie isn't really something that I think translates well without a liberal use of props or lighting but the combination of the interaction between the two and the loopy witches was superb. On the personal note, the lack of a third murderer, in addition to one of the two being the same actor that played Seyton, destroyed any hope for an English term paper on this particular performance, haha. Dashing my apprehension of the ballet hierarchy, after the actors all bowed together to our applause they all gestured together in appreciation to the directors in the sound booth behind us, that was pleasing to me! Speaking of sound booth, the music from the jazz-ercise studio next door leaked through the ventilation ever so slightly, thankfully the actors stage presence and projection limited it to being merely annoying and not obfuscating. I am really glad I took the opportunity to see this, thank you for recommending it to the class!"
Posted by kate at 5:00 PM