from Maya in Vienna 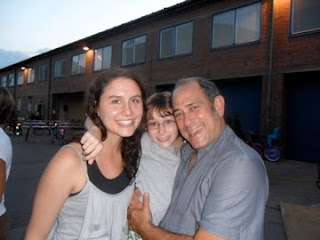 After graduating from the School of Dance this spring, Maya (pictured above with choreographer David Dorfman and his son) embarked on an adventure: she has been living, dancing, creating and meeting artists in Europe. Most recently she was at ImPulsTanz, an international festival of performances and workshops in Vienna, Austria. Here is her update:

"Just got back to Brussels from ImPulsTanz in Vienna and it was amazing! I went to ImPulsTanz because David Dorfman said I could be his assistant and take free classes so I took his composition class, Trisha Brown repertory with Shelley Senter, technique with Ori Flomin and I took class with Lisa Race. The next week I took class with Kenji Takagi and Francesco Scavetta. I also auditioned for a dance program in Venice run by Ismael Ivo and made it really far and find out in September if I get in! I saw performances by David Zambrano, Benoit Lachambre, DD Dorvillier, Les ballets C de la B/Alain Platel and Frank Van Laecke. David introduced me to Keith Hennessy, Risa Steinberg, Davis Freeman among others. I also met Meg Stuart and she asked to borrow a euro! (which she returned to me the next day) Also I was talking to a dancer and choreographer Abhilash Ningappa (pictured below), who I met in Brussels, and he invited me to be involved in his project in October and November!!! He already has the residency at an artist workspace in Brussels. Now I'm back here taking dance classes. I'm living with dancers I met at P.A.R.T.S., and Monday I have an appointment with the embassy to extend my visa!"