an interview with Professor Jim Lepore 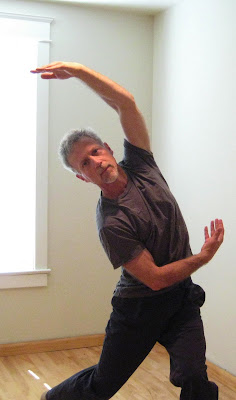 If I need to change my mood from stress to joy, I just have to pass by Professor Lepore's Afro-Cuban dance class and watch a room full of students soaking up knowledge like sponges take water. Their skin glistens with sweat, their bodies accent the rhythms and their minds explore the intersections of dance, religion and politics. It's a moment that perfectly captures the melding of mind, body and spirit. Here Professor Lepore answers questions about his education, teaching and unbelievably talented family.

1. what draws you to dance? and to teaching?
I graduated from high school in 1971, during the throes of an international counter-culture that challenged status quo values and celebrated the virtues of “finding oneself.” My undergraduate years, spent hop-scotching around the US and Europe when not enrolled at a university, were dedicated to doing just that. Before I ever took a dance class, I spent time majoring in philosophy, art history, and/or ceramics. None of these subjects, however, engaged me enough (or engaged enough of me) to keep a fire burning after my initial fascination faded.

Luckily, I had a younger sister who studied modern dance and she, inadvertently, opened that door for me. When I finally started taking dance classes, I realized that they rekindled the charge I got from kinetic sensations as a child. (I can still vividly recall being engaged for endless hours in some physical activity, and being appalled by how disconnected adults were from that world; if growing up meant sitting around and talking, then I wanted nothing to do with it.) Dancing also required that I engage my senses in the immediacy of the moment. To dance was—pardon the 60’s cliché—to “be here now.”

The senses, I believe, not only inform us about the world that surrounds us, they also dictate how we experience that world.
Dancing heightens our experience of that sensate world and fills it with nuance. It brings flavor, color, and texture into our lives. I dance to feel this “aliveness,” and I teach because I want to share these sensations. Dance is a powerful antidote to the cultural forces that value virtual reality over actual experience, or the predictable over the unknown (the magical?). On a number of levels, dance teaches us to trust ourselves and to trust our perception of the world that surrounds us. What better preparation is there for life?


2. what inspired your interest in and experience with Latin / Afro-Cuban music and dance? do you know other artists in the modern dance world who share your expertise?
I have always enjoyed moving. When I was young I was drawn to sports, and as I got older I discovered that I loved moving to music—dancing. Dancing is also etched in my childhood memories, as it was an important part of the frequent parties my parents hosted as I was growing up. As I got older, I remember seeking out venues where I could dance--rock concerts, discos, ballrooms, Greek weddings—and I remember being drawn to cultures that valued dance as a means of celebrating life. Nevertheless, I didn’t take my first dance class (a general education folk dance class) until my third year of university studies.

At the age of twenty-two I began to study modern dance seriously, and was struck by the fact that the worlds of concert dance and participatory/social dance almost never overlapped. While these two worlds share many common elements--concert dance grew out of a social dance form--a veritable schism exists between these two worlds. It is a schism rife with outdated attitudes and class biases, and stereotypical (and hypocritical) high art/low art prejudices.

Cultural factors also play a role in the perception of social and concert dance forms. For most Americans, our exposure to vital participatory dance traditions is relatively limited, whereas dance as a performing art is widespread, from concert halls to popular television programs. I gained some insight into the repercussions of this as a graduate student at Temple University where our professor, Helmut Gottschild, asked each of us whether we considered ourselves to be “performers” or “movers.” To my surprise, most considered themselves to be performers. While I enjoy performing, performance is not central to how I see myself as a dancer. I am a mover—a mover who enjoys the vocabulary of modern dance as well as the opportunity to commune with dancers versed in participatory dance forms.

In any event, when I arrived in NYC in the mid-70’s to study modern dance, I was immediately smitten by the vitality of a salsa scene that was in full bloom. For years I dabbled with dancing salsa “on the side,” improving marginally while simultaneously gaining a healthy respect for its complexity. During this time I was also frustrated by the lack of attention paid to this idiom by dance scholars; there was a dearth of resources about salsa, that for me, shrouded this idiom in mystery. Not until I traveled to Cuba for the first time in 1994 did a big picture begin to emerge. That initial trip, to study Cuban social dance, was a revelation—one that continues to resonate. In Cuba I witnessed dance interwoven into the fabric of everyday life in a way I had never imagined. Furthermore, Afro-Cuban traditions—many still vital—could be traced back to specific ethnic groups in Africa. There are Afro-Cuban forms of the Yoruba, the Congolese, and the Fon, to name a few. Generally speaking, the dance idioms of these cultures encourage multiple generations of Cubans to share the same dance floor at the same time. The result is a contagiously joyful celebration of life through dance—a celebration supported by live music that is “choreographed” to move the dancers toward moments of peak experience.

Apart from its intrinsic value, learning—and eventually teaching—Afro-Cuban dance has also informed the modern dancer in me. It has helped refine my musical sense, added to the palette of colors I use to make dances, and taught me about nuance, especially vis-à-vis use of the torso. It has also, surprisingly, revealed information about dance technique that is invaluable. Most Afro-Cuban dance vocabulary, in situ, is performed in night-long venues. In order to accomplish this, sound biomechanical execution needs to be practiced. The principles underlying this are applicable to any dance form.

On a final personal note, the most touching thing about Afro-Cuban dance is the movement/music symbiosis central to its character. Knowledgeable dancers in this tradition are fluent in the language and rhythmic syncopations of the music. When Afro-Cuban drums speak, a good dancer responds in kind. Dancing infused with musical dimensions of this nature is out of this world.

Is this combination of interests unique? Not really, though it is rare. I know two or three Americans who teach modern dance and some form of social dance. On the other hand I have a number of colleagues from Cuba, where participatory dance is pervasive, who teach both modern and Afro-Cuban forms. This reflects the different cultural perspectives I spoke of earlier.

3. Can you explain the incredible talent in your family - producing a dance scholar and world-class fashion designer... did you eat "creativity chips" for breakfast while the rest of us were having "frosted flakes"?

I have three siblings and all of us are “artistic.” For a while three of us were dancers. My younger sister Michele was the first dancer in the family, and my younger brother, Jeff, performed with Mark Taylor, Susan Marshall, and Randy Warshaw. We all considered Nanette, our fashion designer sister, to be the black sheep.

Growing up, my mother was nurturing and tolerant, and while raising four children went back to college to earn a degree in education. She also had a lovely singing voice and I have wonderful childhood memories of her breaking into song whenever. Our house was saturated with visual art. My father was an abstract expressionist painter who hung large canvasses of his work all over the walls. These paintings were frequently the topic of conversation by his beatnik colleagues who often hung around. My boyhood friends also offered their own commentaries, which went mostly along the lines of “I can do that” or “What’s it supposed to be?” We were sort of the resident “gypsy family” (our vacations always required some form of car camping) in a working class neighborhood of second-generation immigrants. While my siblings and I were never presented with expectations laid down by our parents, the modeling was apparent: having art in one’s life gave it meaning, and art-making should always retain a sense of playfulness.
Posted by kate at 5:12 PM