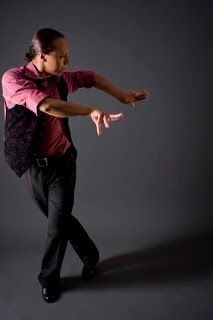 Legs flicker in rapid rhythms that dive and cut between the singer’s voice. The contrast between the plaintive sounds and driving patterns conjures a feeling of mixed emotions, irreconcilable feelings that burn within each of us. Watching Edwin Aparicio’s concert “Alma Flamenca” today at the Gala Theatre, I was transported by the beauty and eloquence of the dancers and musicians. It was one of the best performances I have seen in DC and reminded me of a flamenco performance I saw just after September 11, 2001 when Noche Flamenca performed in Connecticut. I was living close to New York City at the time and the flurry of the dancers’ feet contrasting with the sinuous flow of their arms and backs seemed to capture the conflicting emotions in the audience, the sadness, anger, grief, and rage that was palpable at the time.

If the audience today seemed more subdued, the dancers on stage were not. The performance was transcendent. It opened with a trio of gorgeous women who commanded the stage with their footwork and fans, then shifted to a more somber solo choreographed and performed by Defne Enç. Dressed in black, she embodied a sense of calm strength as she stalked across the stage and poured passion into virtuosic phrases. The duet that followed, “Seguiriyas” by Edwin Aparicio and Genevieve and Guinn, brought out one aspect of flamenco that makes me cherish this dance form: the women and men take part in the dancing that is aggressive as much as they share the phrases that are more subtle and subdued. I was particularly impressed by Guinn’s performance because Aparicio is a stellar artist who makes it hard to watch anyone else on stage. She matched his power in her own exquisite way and their duet turned the stage into a richly woven fabric of music, dancing, and duende.

In a book I am reading about flamenco, Goethe is quoted as saying: “Duende… a mysterious power that everyone feels but that no philosopher has explained.”

It is the spirit that seems to overtake a great flamenco dancer and it was visible today. It is another element I love about this dancing and music: it’s not only mesmerizing to watch – as bodies and faces paint shapes and emotions on the stage – but it also deeply human and intimate. The dancers appear propelled by internal forces and allow for some play between control and risk, structure and freedom.

This may be why I find it so effective as communication. Although the performance was planned and choreographed it also valued creativity and spontaneity. The artists transmitted messages and ideas directly from body to body, dancers to musicians, and performers to audience. It was a moment that defies explanation. It must be felt and lived.

For more information about Edwin Aparicio, check out this terrific interview from DCist.
Posted by kate at 5:41 PM