from Chrissy Tully: "Communication is key." 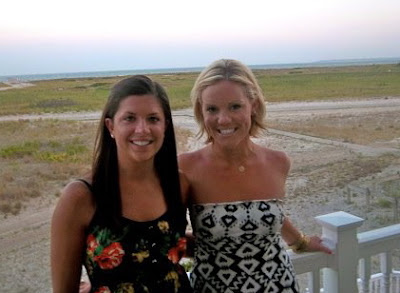 Hearing about the adventures and accomplishments of students who graduate from GMU's School of Dance is without a doubt one of the best parts of teaching. When current students presented the School of Dance Gala last weekend, Shanleigh Philip (in the photo above on the left) and Chrissy Tully (on the right) from the Class of 2010 were in the audience at the Center for the Arts. Their current positions with The Joyce Theater (for Shanleigh) and Ellen Jacobs Associates (for Chrissy) give them an insider’s perspective on how choreographers and companies survive and thrive. I asked Chrissy to answer some questions about her day-to-day life, and also to offer advice to students graduating this semester…. Here are her replies:
Can you describe a typical day? What are the most exciting (and least exciting?) parts of your job?

Chrissy: I know it sounds a bit cliché, but there is no typical day in my position. However, there are standard procedures, such as editing press releases, archiving press on clients, drafting press kits, respecting deadlines, etc. It's the unexpected part of my day that is the most exciting. When I get the opportunity to attend a photo call and see a work the day before its premiere, and when I get to interact with choreographers and artists one-on-one, that's what makes it all worthwhile.
What was it like to come back and see the current GMU students performing?
Chrissy: It was a unique experience coming back to GMU and watching the current dance majors. It definitely seems much longer than a year ago that I was on that same stage. While watching the Gala, it was clear that the students in the School of Dance are outstanding--they're strong, versatile, and above all, powerful movers. That being said, power isn't always art. I know there are students who were not chosen to be in any of the selected pieces in the evening's program, but that does not mean that they are any less of an artist. Some of the greatest works I have seen since living in NYC had little to do with technique. I know from being in their shoes, or lack thereof, that the competitiveness can be discouraging. Some people aren't meant for the most well-known companies out there, but that doesn't mean they don't have a shot at pursing their passion.
What is the most important advice/suggestion you can pass on to someone graduating this year?
Chrissy: Some advice to pass on to someone graduating this year is that you don't always have to have "it" figured out. Life can take you in all sorts of unexpected directions and you just have to go with it and make the most of every situation you're in. A suggestion I have is to see and read about as much of the arts as you possibly can. The more you immerse yourself in the arts world, the more exciting and fascinating it will be.
Are there classes or experiences you had as an undergraduate that prepared you for what you are doing now? or looking back on your college years do you wish you had taken a class or experienced something that would be useful for your careers today?
Chrissy: 9am dance classes Monday-Friday were definitely a preparation for what I am doing now!

Office hours aside, I would not take back the education I received as a B.F.A. dance major. I do, however, often wish I could have done more. There are so many interesting classes offered at GMU in the music, theater and art department that were simply impossible to explore while fulfilling the required credits. Even though other general education requirements were relevant to what I do now, I think all dance majors need to take an accounting class, especially if they are planning to move to a city as expensive as New York. The cost of living is extremely high, and if not properly planned/prepared, it's very easy to lose your love of what you do.

I wouldn't say friendships were extremely significant as part of my education, but they definitely play a big part in networking. Rarely will I go see a performance and not recognize at least one person in the audience, on the staff, or on the stage that I have never interacted with at some point. Communication is key and it's extremely important to be knowledgeable about the field you're in. For that reason, I benefited from Dance History in ways that are crucial to what I am doing now. Daily modern classes aided in embodying some of the history and exploring the creative aspects of dance.