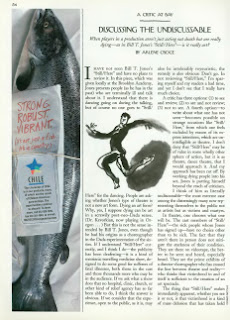 Another post by a choreographer/performer enrolled in the MFA program in Dance at GWU: part of the course I teach asks students to read different critics and analyze their perspectives.  Here Dawn Stoppiello addresses a seminal piece in dance criticism.

Arlene Croce was the dance critic for The New Yorker from 1973 to 1998. She founded Ballet Review magazine and was a film critic prior to her career as a dance writer. Croce has written several books on dance but this article, “Discussing the Undiscussable,” is an important part of her legacy and recognition. Her audience includes the large readership of The New Yorker and many dance enthusiasts and professionals.
As a “newbie” in New York City in 1994, I remember vividly when “Discussing the Undiscussable” came out. With this piece Croce started an extremely important and controversial conversation on art and criticism, one that had been waiting to be had. Already somewhat identified as an old-school uptowner, with this article Croce exposes herself as a brave journalist even if (and precisely because) her expressed opinions were not in line with everyone’s.
Surely it is agreed that the quality of an artwork is subjective, but what Croce is arguing is that it is impossible to formally critique something that is, first, and foremost a “being of something” rather than a “theater of something.” I mean to say that being a terminally ill person and not acting as one has no formal perspective from which to be critiqued. How does a critic critique a real person’s unscripted and unrehearsed real story?
Her term “victim art” provides a category to describe works by artists who were blending real life with theatrical life in the 1980s and 1990s, specifically those talking about disease, death, and dying. She also throws in anyone who might be complaining about his or her oppressed position in society. While making her distaste for this kind of work clear, essentially Croce is questioning the role of the critic in the late 20th century. She is challenging the criteria for critiquing a work that is made up of tragic life experience. Can the critic put aside emotion and find the aesthetic and/or formal angle from which to address the work critically?

Joyce Carol Oates’ response to the article includes a litany of artists throughout history whose work incorporated passages, images and other elements of “real life.” She also mentions several times that some of these artists works were not appreciated or even experienced in the artists’ lifetimes Oates’ list demonstrates the longevity of the tense relationship between art-criticism and art-opinion, and by extension art-survival. By reminding us that highly regarded artists were not recognized by the critics of their day reinforces the idea that a positive response from a respectable critic raises the artist into the light and that the informed critic has the universal say on quality, even posthumously.
The power of the “formal” critic as the only means to anoint an artist as worthy has been under fire ever since the definition of art has been debated. The complexities of new art categories and artists who overtly challenge the elite concept of art feverishly flame this debate. The expertise needed for a critic in the 20th (and now 21st) century has become more and more difficult to define. Since so many art movements blew the lid off what is regarded as dance, as theater, as art, the critic might now have to specialize in a particular type of expression within their medium of review in order to give it “formal” critique. If “formal” stands in for educated and literate in a particular field then a kind of specialization would surely be in order in today’s cacophony of hybridized art mediums.
The Internet age has unleashed a chorus of “uneducated” bloggers and commenters, regular folks whose opinionated voices are chiming in. Croce believes that formal and publicly presented discussion amongst critics is crucial for the evaluation of art. This elevated discussion is an important one however, online reviews from writers with lesser status than Croce, writers from the “blog-o-sphere,” count in an artist’s grant application folder today. There is less and less “elite” criticism in the age of the Internet but more and more voices are included in the conversation. The expansion of mediums and the expansion of art audiences brought upon by personal computers and digital communication has changed the playing field. Access equals inclusion. Inclusion equals change.
Joyce Carol Oates aptly describes “victim” artists through the centuries. In so doing she points out that neither art nor criticisms of art are singularly defined positions that remain static through the ages. As our cultural values change so do our perceptions and emotions about art. Most critics throughout history, as Oates’ observes, cannot see the next art wave while it is happening. Steve Jobs famously said that people only know what they want after you’ve shown it to them. Marshall McLuhan believes that the artist has a unique relationship to time by being so firmly inside the present moment that they can predict the future. He says, “Art at its most significant is a distant early warning system that can always be relied on to tell the old culture what is beginning to happen.” Here I will share a personal example of this phenomenon. My company Troika Ranch and other early users of video and computer technology in live performance all received reviews in the mid-1990s that included a variation of a statement like “the group almost pulled it off but were not able to fully integrate the video with the live performers” or “the video overwhelmed the dancers.” Had ALL of us really got it wrong? How interesting then that the NYU ITP (New York University Interactive Telecommunication Program) students who came to these shows, and loved them, saw the integration. In fact they didn’t even see it because for their eyes real life and video/computer life were already integrated. Who then is educated enough to say if these art works got it right or not?
Finally, Susan Sontag’s response to the Carol Oates response perpetuates the circular conversation. None of the three writers Croce, Carol Oates or Sontag directly discuss the Bill T. Jones’ work Still/Here. No one is talking about the work. They are talking about talking about the work. They are trying to settle on the role of criticism as a “formal” means of discerning the “rightness,” the value, the non-obscenity, and the good of an artwork (or essay about an artwork). Critique is defined in the dictionary as “a detailed analysis and assessment of something.” The question continues to be whether one needs to be formally literate in a medium in order to analyze and assess it in detail? Another question would be what defines a medium? The argument around what actually makes something art simply gets more complex over time. When a worldwide definitive description of art, especially “good” art, is agreed upon then this discussion may cease. But until that day we endure, even encourage the conversation.
Posted by kate at 11:36 AM