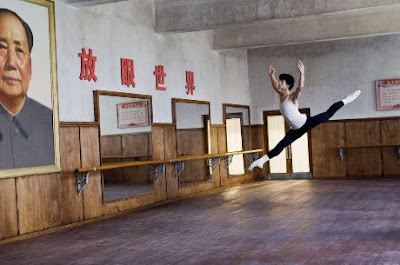 Last night’s viewing of dance films and videos brought together a small group of friends at my studio apartment to watch This Is It as well as a documentary on Butoh called Piercing the Mask, a brief clip of an Yves Klein performance, a film by Ludovica Riccardi about the creative process of Pierre Droulers and work by Beijing's Living Dance Studio.


An eclectic group of ideas and artists – what could possibly be shared among creators as diverse as Michael Jackson, Yves Klien, Tatsumi Hijikata, Kazuo Ohno, Wen Hui and documentary maker Wu Wenguang, and Pierre Droulers? What emerged over and over in the lively conversation that followed each film/video were distinct approaches to the body, to movement and to creation. Although the friends gathered are all curious about dance, we came to the discussion from different places; our unique perspectives included those of a writer, a massage therapist, a choreographer and performer and someone passionate about improvisational comedy. It was inspiring to listen to how each of us responded differently – and profoundly - to what we saw.

I thought of this again today when I went to see Mao’s Last Dancer (photo above), a film based on the true story of Li Cunxin's childhood and career. Much has been written about one of the first scenes when Li almost misses his chance to pursue dance, but it was a later incident that really impressed me. A ballet teacher gives Li contraband: a videotape of a performance by Baryshnikov (who has been dismissed in an earlier scene as a filthy defector…). Li is mesmerized and from this glimpse of what dancing can be, dedicates himself wholeheartedly to becoming an artist.

These glimpses we are given of other approaches, other performers, other ideas can be truly transformational. I strongly recommend Mao's Last Dancer as a film or the book and if you have never seen Klein's creations, there is a retrospective at the Hirshhorn until September 12.
Posted by kate at 4:45 PM