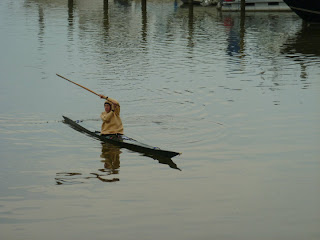 On July 29, 2010, Karen Reedy Dance performed a site-specific dance at the Torpedo Factory, inspired by resident artists Marsha Staiger and Alison Sigethy. For me, the artist’s joint exhibition in the Torpedo Factory’s Target Gallery, titled “Art in Balance: Rhythm and Repetition,” evoked images of water, summer, relaxation and playfulness. Marsha’s bold use of color was both playful and mesmerizing. As I stood in front of her work, I was taken on a journey and transported out of reality into a magical space. Alison’s three dimensional work continued the layers of depth in theme. Her “Water Wall” (which looks exactly as it sounds) created a serene atmosphere, while her colorful “Fireflies” again referenced the ease and joy of the summer season.
I enjoyed witnessing the artistic process and collaboration leading to the art exhibition “Art in Balance,” while being a part of the collaboration that led to the performance of KRD. From both visual artist’s work, I drew inspiration for the dance. Marsha’s use of bold color and sense of play, combined with Alison’s sensitivity to natural elements such as water, provided ideas as to how the dance might interact. The performance began in the water, continued outdoors on the waterfront, led the audience inside and came to completion in the Target Gallery.
There were many exciting and experimental aspects of this performance for me as a choreographer. The first involved a dance for kayak. Alison Sigethy provided inspiration and expertise not only as a collaborating artist, but also a highly ranked kayak competitor. Not being experienced with kayaking myself, I was challenged and thrilled to learn about how a kayak moves. I found such grace and elegance in the sport, and wanted to learn its movement language. For three weeks. I met Alison at the marina in order to witness characteristics of kayak paddling and rolling, while attempting to apply choreographic principles to the sport. I wanted to transform the sport into an art form. One of the most interesting difficulties I encountered had to do with the changing tide. There are many challenges in choreography for dance, but one of those problematic elements is not a moving floor space! Water provided a variable I was not familiar with. Creating a dance for kayak was an educational experience and will definitely inform my work in dance. I had a blast! Alison is a master of her kayak and is indeed a dancer in her own unique water art form.
Following Alison’s kayak performance, six dancers spread out along the waterfront outside of the Torpedo Factory. The structured improvisation consisted of movement material related to Alison’s kayak dance. The dancers then performed a repetitive phrase traveling from the outdoors to inside, inviting the audience to travel with them. The remainder of the performance involved sections of improvisation combined with staged choreography. The first dance provided images of bodies of water in “Undertow, while the second work was titled “Beach Balls” in response to the colorful balls utilized in Alison’s “Fireflies” along with Marsha’s brilliant use of color.
Musician and composer, Jeff Franca, brought the element of sound to the event. Without his improvised environmental and percussive musical talent, the work would have been incomplete. Jeff utilized natural sounds of the outdoors as well as a broad range of percussive grooves to unite the various artistic elements. This performance was only possible through such wide collaboration of open minds. The live music, dancers, visual artists, space, volunteer support and audience provided a mix of elements unique to that evening. I feel fortunate to have been a part of such collaboration with so many generous and talented artists.
Posted by Reedy at 6:30 PM