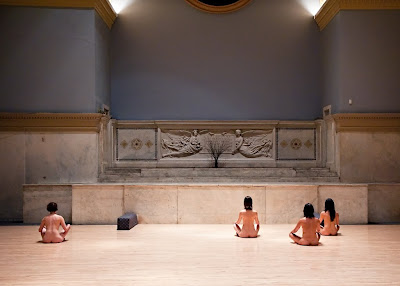 photo by Ian Douglas
This photo is from a performance at Judson by Kelly Bond which took place April 26. The performance I saw yesterday was Ballet Across America II. Hard to believe, but this post will connect these disparate events...
Ballet Across America brought together Ballet Memphis, Ballet Arizona and Pacific Northwest Ballet. Ib Andersen’s Diversions for Ballet Arizona was a regal and ethereal suite of dances to Benjamin Britten’s music, while 3 Movements by Benjamin Millepied for Pacific Northwest Ballet, was set to music by Steve Reich and had the dancers wearing pedestrian costumes in a palette of grey, set against a backdrop of long curtains of fabric in tan, light grey and slate. It's hard to hear Reich's music without thinking of Anne Teresa de Keersmaeker who has created some gorgeous ensemble works – Rain and Drumming - to his scores. There was also a rebounding quality in Millepied's choreography that gave the piece a contemporary feel although the women wore toe shoes. Carla Körbes and Batkurel Bold were breathtaking in a duet and all the women had legs that seemed to extend to infinity. Millepied’s movement was quirky and creative, mixing stylishness with joie de vivre.
The first piece of the evening was Trey McIntyre’s In Dreams to music by Roy Orbison; it was like Dances at a Gathering for the 21st century, but with five dancers instead of 10. McIntyre used Orbison’s distinctive songs (and part of an interview) in ways that were fresh and unexpected. The piece unfolded as a series of group sections interspersed with solos and duets. It evoked feelings of longing, desire, and melancholy. The performers were dressed all in black - cowboy shirts and pants for the men, sleeveless mini dresses for the women – and some of their steps seemed robotic and mechanical. But the contrast between these moments and the more dramatic phrases, emphasized the human-ness of the performers and their emotions. There was none of the heroic posturing associated with ballets of the 20th century. At the end of the piece the man in front of me turned to his wife and asked “was that ballet or modern dance?” Labels can be so irksome. If art continually evolves, just as our ways of interacting with the world change, how can “ballet” or “modern dance” remain stagnant? If you were wondering why or how this post about a ballet performance includes a picture of naked women at Judson Church in New York City, here’s the link. I saw the matinee of the ballet at The Kennedy Center and in the evening met up for a conversation with Kelly Bond. She is one of a handful of artists I know in DC who is pressing against the definition of dance as movement set to music to create a narrative or express an emotion or simulate the spectacular.
She spent seven months of 2008 working in France at Mathilde Monnier’s choreographic center where she collaborated with artists like Xavier Le Roy and theorists like Bojana Cvejic. She was recently invited by Movement Research to perform at Judson Church (which explains the photo), and next month at the Capital Fringe she will be presenting a piece called Elephant. If you are drawn to performances to see dancers sweat, or if you judge the value of a performance by technical virtuosity, this is not the show for you.
Kelly’s last Fringe performance was inspired by the idea of Hans Bellmer: “The body is like a sentence that invites us to reimagine it, so that its real meaning becomes clear through an endless series of anagrams.” Anagrams are usually associated with rearranged words, and there is a rule that every letter must be used, with exactly the same number of occurrences as in the anagrammed word or phrase: “Jim Morrison” is “Mr. Mojo Risin.” In performances I have seen, Kelly typically arranges and rearranges scenes, which the viewer then pieces together in their mind/memory. There is no explicit narrative. There is no music. There is usually no costume, except the naked body.
Her work reminds me a lot of what Yvonne Rainer was exploring in the 1960s: stripping away the trappings to see the body as a phenomenon, and then investigating how the interaction of perception and movement can be subtle and powerful at the same time. Here is an excerpt from an interview with Kelly that was created by the Fringe festival:
Q Speaking as a spectator, what do you look for in performance?

Kelly: I like to see questions, things that make me think.

Q What makes your work unique?

Kelly: It’s direct and open. Specific. Relatable. Bold. Questioning. There is a close relationship with the audience that the work cannot exist without.

Q What does 'success' mean to you?

Kelly: Response. I feel that my work is successful if people have a response, if they find themselves thinking about it afterward, whatever those thoughts may be. If an audience feels neither here nor there, I have a lot more work to do.

Q Why are you doing the Capital Fringe Festival?

Kelly: It’s important for me to feel immersed and engaged in my local performing arts community in order to thrive as an artist here in DC. I want to see what others are doing, and I want the community to know my work as well. Dialogue is essential to creating quality work. We need conversations that continuously ask and answer questions, propose ideas, and relate to the past and future of our field, and our field within our society. Capital Fringe is an organization that makes dialogue possible and that cheers us all on.
Posted by kate at 7:08 PM