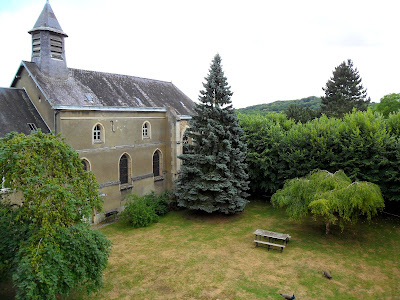 Performers leaping on cars and rolling on cement may not be the first images that come to mind when you hear the phrase "dance concert," but Liz Lerman Dance Exchange made these images part of an event Friday night in DC. When I reviewed it, I used the word "fearless" to describe the artists, and thought about how any new venture requires risk and courage. Fearless is a word that also comes to mind when I hear about the plans and projects of recent GMU graduates like Maya Orchin.

During her summer before senior year, Maya was in France working with David Dorfman and becoming inspired by the people and ideas across the Atlantic. After graduating this spring, she flew to Europe, first working with an artist at PAF (the incubator for theorists and artists) located in France and run by Jan Ritsema, then traveling to Brussels.

She writes: "So i made it to Brussels!!!! PAF was amazing - an unbelievable place. They turned a huge convent into a performing arts retreat. The rooms have been transformed to studios with unbelievable views. Here's a picture (above) of the PAF inner courtyard from my room...  When you walk the halls you hear a mixture of dancers rehearsing, musicians playing, and you see writers and poets outside and painters usually would be in the bell tower. At night there were showings and I saw bizarre dance pieces where a woman just moved her head for an hour and a half. There was a group from Australia working on dance and visual art and combining the two. There was a great Norwegian group who were editing films. I met these fabulous scientists from Paris and I met a dancer from Amsterdam who sat me down and told me everything about the dance scene there. PAF is run by Jan Ritsema-a prominent European choreographer who has taught at P.A.R.T.S. school in Brussels. When the Laban school came I was invited to take their movement, vocal, and Alexander class a few times so that was a great experience. I met some great dancers from Italy and will see their show in London in October.
I was personally working with a choreographer and two other dancers and we were creating a piece about vertigo and the creation of the waltz. When the waltz was first danced, there were medical reports saying it caused pregnancy problems and monster children. My choreographer's idea was to play with the mindset of these women and how they used the waltz as their escape route from their everyday lives. It's in the beginning stages but we worked on writing and creating alter egos for ourselves, choreographing movement and seeing what developed. We ended up with about 25 minutes of material at the end of PAF and had a showing and Jan gave really helpful feedback. We went back to Paris for two days and rented studio space to continue to work. We filmed our last rehearsal and the choreographer is sending the film and paperwork to apply for a grant from the French embassy in September which could mean that we could get paid and tour the piece. Now I'm here in Brussels figuring out the dance scene. I just met with a dancer tonight who gave me the inside scoop and am looking at festivals and looking to get involved."
Posted by kate at 9:10 PM