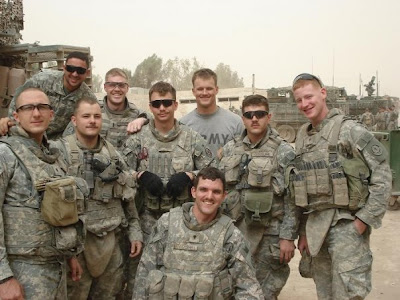 Teaching Dance Appreciation this summer at GMU has been eye-opening. Among the students in the course is Jeremiah Howdeshell, who was an enlisted infantryman in the Active Duty portion of the Army for 4 years. He writes: "my first unit was the 1/24 Infantry Regiment, 25th Infantry Division in Fort Lewis, Washington from January 2006 - June 2006. Our unit reflagged and we changed to 2nd Stryker Cavalry Regiment and moved to Vilseck, Germany from July 2006 - August 2007. We deployed to Baghdad and Muqdadiyah Iraq from August 2007 until October 2008. I returned to Vilseck until August 2009 when I was awarded an ROTC Scholarship to end my service early to start the path to become a commissioned officer. This picture is from Muqdadiyah; we don't have a lot pictures from Baghdad because we were shot at on a daily basis and when we were back at base we were too tired to do much beyond sleep, eat and call home. This is a group of us from 'Mustache March' where most of us affirmed that we need to not grow a mustache ever again."
One reason I enjoy teaching Dance Appreciation is because it brings people together to discuss not only different ways of dancing, but also cultural identity, how we express values and beliefs, and how we respond to other cultures and ideas. Jeremiah has been able to broaden our perspectives on what is happening today in Iraq, and is also a gifted dance writer. He attended "Ballet Across America" at The Kennedy Center last month. Portions of his review are here. He says "I chose to see the ballet because I had never seen anything like it before, and as a part of my love of traveling and exploring I always try to give new experiences a chance, and more often than not it has been rewarding." An excerpt of his review:
"The third movement, Shindig, initially surprised me based on the name, and did not disappoint me in being a surprising performance. Dancing to the music of a blue-grass band, six couples burst onto the stage hooting and stomping, the men in jeans and short sleeved shirts and the girls in summer dresses with knee length skirts. The atmosphere of this movement was completely different from the other two [performances by Houston Ballet and The Suzanne Farrell Ballet], but still contained the basic elements and feel of a ballet.
The dancers still did lifts and twirls, kicks and leaps, but incorporated typical southern dance moves such as heel and thigh slap kicks, stomps and jigs, and even hooting and hollering, breaking the trend of non-vocal performers that persisted most of the night. While a couple took center stage to dance together, the other dancers, rather than perform a simpler dance on the outskirts of the stage, would pretend to chat or interact with one another, and it felt like watching a musical at times rather than a ballet. They were so in-character that one of the dancers picked up a slipper that one of the dancers had left behind on a previous dance when the stage went dark, then smelled it and recoiled in disgust before throwing it off to the side of the stage. One particular moment that highlighted my experience as an amateur ballet audience member was when one of the men pretended to be fishing for one of the girls and reeling her in toward him, and she spun the whole way toward him rather than walking, and this was one of the few times the audience applauded mid-performance because of her high number of sequential spins. During Shindig the performers had several solo dances and show-boated to illicit applause, and even instigated applause from the audience during a particularly 'slappy' tune. There also seemed to be an aspect of percussive attack to the choreography throughout the movement, as the men frequently incorporated stomps and slaps in their steps and leaps, particularly in formation dances. Similar to the twirls of the first movement accompanying fast paced violin moments, the dancers in this movement twirled quickly in response to fast-paced fiddling, displaying parallels in the choreography to the music.... I could tell these dancers were really enjoying themselves, while the dancers from the other sections stayed serious throughout their performances. Some of the more entertaining and unique aspects of the choreography were the line and circle dances toward the end of the movement, that continued to mix aspects of southern 'shindig' dancing with classical ballet leaps and twirls. There weren't quite as many high leg kicks as the other two movements, and the performance was much more geared towards getting down and feeling earthbound and natural. One of the most unique aspects of this movement was a dancing maneuver that seemed to be a mixing of ballet and the unique southern flavor of the performance, which was a twirl that the females performed while standing on their heels. It looked almost unnatural and was very interesting to see them do so gracefully. This movement alone made the entire performance of the night worthwhile to me. It was a lot of fun to observe the seamless combination of ballet and southern dance. The encouragement of the audience to participate in clapping along with some of the beats and to cheer for solo performances made it significantly more fun and friendly to a sophomoric ballet audience member."
Posted by kate at 8:32 AM