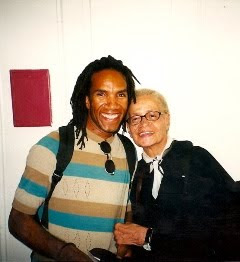 Clarence Brooks. the name that may be familiar to you already.
I met him in the mid-1990s when he was dancing with the Nikolais/Louis company. Our paths crossed frequently in NYC and again in 2005 in Boca Raton, Florida where he is the Director of Dance at Florida Atlantic University.

This spring, while teaching Dance History at George Mason University, a video of Nikolais' work included Clarence as one of the dancers. When he appeared on the screen, a student shouted out "That's my teacher!" She had taken his classes at Bak Middle School of the Arts in West Palm Beach. The point I am trying to make: Clarence has been invested in dance for decades and the impact of his thoughtful teaching and dedication to this art-form is widespread. Here's the interview:

Question 1: Why do you teach?

Clarence: I started teaching dance shortly after I started training to become a dancer - which is not something I would recommend. It is something that I really enjoy doing. As a highly kinetic and spatial learner, I obtain a great deal of sustainment observing others challenge their bodies, their imaginations, and their use of space and environment. Watching others learn enables me to have a deeper understanding of what I am doing as a dancer, teacher, choreographer and as a student.

Question 2: During your dancing career you have performed in virtually every state with a range of ballet as well as modern companies, what advice would you give to aspiring dancers?

Clarence: I am so very grateful to this field for the opportunities it has afforded me.
Always educate yourself; place yourself in a learning environment; what you learn can never be taken away from you; learning is never a waste of time, energy or money;
Study the other art forms and the relationships between them;
Study more than one dance form and see as much dance as possible;
Document as much of your training and career as possible; collect a program from each performance you participate in; get a video/DVD; collect photographic images of you in rehearsal and performance as well as you with your peers and teachers; write down your recollections of classes, master classes and performances;
Audition for the sake of auditioning; you are not entitled to get everything you audition for (or apply for) but you should open yourself to the possibility of a new experience as well as to the inevitability of rejection;
Don’t be afraid to fall/fail because the ground is not that far below us;
Don’t be afraid to get up/fly again – do it with grace and humility;
Unfortunately, Life and dance are roses with thorns; things are so much better now than they were and if the youth put their shoulder to the wheel it will get even better; but you have to get involved, and do the right thing, and keep forging newer, better paths for those who will follow behind you;
Above all, be a good person and try to do no harm;

Respect yourself; take real good care of your instrument; treat it well and responsibly.

Question 3: We both admire and miss Kathy Grant (in the photo above with Clarence). How did she contribute to your growth and success as a professor?

Clarence: Kathy Grant was a teacher and mentor and friend to me.
When we were introduced to each other after a performance she noted that because I was the only black person onstage and she was the only one in the house, other audience members thought I was her son. She said since I knew what I was doing she did not disown me nor did she set the appreciative-but-mistaken audience members straight. She guided me through other moments of racism that were not as endearing as our initial greeting.

She was there to offer solace when my sister died of cancer. And several years later, I was able to comfort her when her son, Malik, was killed.

I called on her several times when I was experiencing very tough times teaching. Even though I knew I had information to share with students, she prevented me from throwing in the towel when I wanted to turn away from teaching middle school and run back to the stage.

When I was mercilessly beating myself raggedly attempting to win the hearts and minds of every student in my classes, her mantra to me was if I turned on just one light I did the right thing and fulfilled my duties and responsibilities as an educator. This guided me to see a class not as a monolithic body with multiple limbs and minds, but to focus in on the individuals in that space.

Walking into a private or semi-private session with Kathy could be - and often was - daunting for me. At the time that I worked with her she was teaching at NYU/Tisch in a very small space about the size of 3 large closets. Along with learning, memorizing and efficiently and effectively performing each of the therapeutic series of exercises (some of which were custom-designed and tailored for each individual), there was a good deal of protocol for coming into the space; everything had a place to exist; and there was an order and process for picking up and handling all props, instruments and equipment – even when, where and how to pass by another client working in the space was prescribed. And lo be the poor soul that broke the unwritten rules and procedures; her wrath could be stinging. The equipment in the studio were all hand-built by Joseph Pilates himself and she justly, rightfully, and religiously, managed these items and expected all patrons to do so as well. I fully understood the need for the protocol, rules and procedures and create them for the spaces that I exist in to this day. I do explain the reasons for these as well as the consequences of what can happen (damage to property, facilities and/or bodies as well as loss of usage for repeated infractions) if the rules and procedures are not adhered to.

Question 4: Can you tell us something about Kathy's impact on Dance History?

Clarence: Many folks know Kathleen Stanford Grant as one of THE Pilates gurus, but she was far more influential than that to the dance community. As we chatted in her bedroom the last time we spoke in person, she lamented the fact that folks would only recall her Pilates-self. In her youth, Kathy had aspirations to be a competitive swimmer. But there weren’t swimming pools (or limited access to the few that existed) due to segregation in New England (Boston area) so she gravitated toward her next passion, dance. Dance being such an ephemeral art form and her performance career and administrative endeavors were decades in the past - out of the experience and knowledge base of many folks, she rightly knew that her artistic-self would not be credited when she passed away.

I do not have all of the facts of what all she did; I have tidbits of information. I knew she directed the Clark Center for the Performing Arts in NYC. It was the place where African American choreographers, teachers and companies could find rehearsal space. In her apartment she caught my eye taking in a series of headshots in a picture frame on a wall (Arthur Mitchell, Paul Taylor and hers being the few that come back to mind immediately). The story she related is that this was the dance company that Taylor put together for a performance at the invitation of Gian Carlo Menotti in 1958 for the Spoleto Festival (Italy), the inaugural performance of this renowned festival. During an earlier conversation, I learned that her tenure at DTH was marred in part due to disagreements between Karel Shook and she over teaching methods and discipline. After seeing a Laura Dean Dancers and Musicians showing that I was in at DIA (now Joyce SoHo), she delighted me with her recollections of being in a very small crowd that staid through to the end of some of the early dance-movement-vocalizations of Dean. These are just a few recollections of things she mentioned.

Kathy’s biography and obituary list several of the high points of her career but there is so much that is missing from a life so fully lived in this field during the time that dance was growing and developing in this country:

A former dancer whose background includes Broadway, off Broadway, television, industrials, touring companies, and the concert stage in the U.S.A. and in Europe, South America, Africa, and the Middle East. Has been assistant choreographer to Donald McKayle, Walter Nicks, Arthur Mitchell, and Michael Smuin and codirector and partner with Claude Marchant Dance Company. Has performed with Mary Hinkson, Carmen DeLavallade, Mary Anthony, Donald McKayle, Paul Taylor, Geoffrey Holder, Arthur Mitchell, Bill Robinson, Honi Coles, Cab Calloway, Pearl Bailey, and others. Has served as a dance panelist for the National Endowment for the Arts, the New York State Council on the Arts, the Delacorte Theatre, and Dance Black America. A student and protégé of Joseph Pilates, she is one of the few who was certified by Mr. Pilates in a program sponsored by the University of the State of New York, Division of Vocational Rehabilitation. Has conducted workshops in the Pilates method in California, New York, Maine, New Mexico; in Tokyo, Japan; and in Montreal, Canada, for Les Grands Ballets Canadiens.
Posted by kate at 7:48 AM